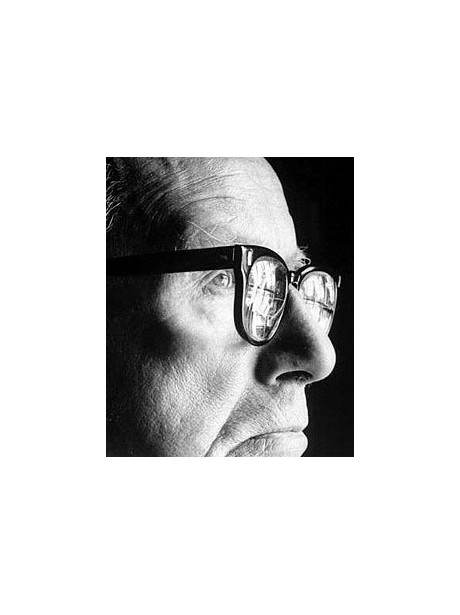 Sometimes called "Léonard de Vinci" of the XXth century, the American Richard Buckminster Fuller (July 12th, 1895 - July 1st, 1983) is an engineer, a mathematician, a designer, an inventor futurist, architect, cartographer, philosopher, poet and more. He created several audacious inventions to improve humanity. Prolific writer and outstanding speaker, Fuller thinks that a large number of humanity problems can be resolved by a massive adaptation of the new technologies, as well as by a better use of the resources of the planet. Self-taught, although he did not continue an university way, he receives 47 honorary doctorates for his diverse works, of which a resulting of the Mc Gill University of Montréal. He also received few honorific prices, which in the highest distinction awarded to a civilian in the United States : the Medal of Freedom in 1983. Great speaker, he went theroundl the world 57 times to give hundreds of conferences.

Fuller publishes more than 30 books, invents and popularizes terms such as "earth", " ephemeralization " and "cynegetic". He is the origin of numerous inventions, mainly architectural designs, the most known is: the geodesic dome. The molecules of carbon will later be appointed " fullerens " by the scientists for their resemblance in the geodesic spheres.

Energy and cheap, "Dymaxion House" of Fuller aroused a lot of interest, but was never produced. Here, the word " Dymaxion " is used to mean a " structure radically solid and light ". One of Fuller Dymaxion house is presented in a permanent exhibition in Ford Henry at Dearborn, Michigan. Conceived and developed during the middle 1940, this prototype is a round structure (not a dome), which looked like the "bell" of certain jellyfishes. He had several innovative characteristics, among which the drawers of the rotation chest and a shower of fine fog which reduced the water consumption. According to the biographer Steve Crookes, the House was planned to be delivered in two cylindrical packages, with interior panels, available in local retailers. A circular structure at the top of the House was conceived to turn around a central mast using the natural winds for the cooling and air circulation Conceived about two decades previously, and developed to Wichita, in Kansas, the House was light and adapted to the windy climates. It was made to be very cheap to produce and to buy, and to be assembled easily. It must be produced by using factories, workers and technologies of the aircrafts of the Second World War. It had an ultra modern aspect, it was a metallic construction, and dressed in aluminum. The basic model was closed by 90 m ² (1000 square-feet) of floor surface. Because of the advertising, there were many commands at the beginning of the post-war years, but the company made by Fuller and other people to produce Houses had no future because of management problems. In 1969, Fuller launched the Otisco project, named according to its location in Otisco, New York. The finalized project is demonstrative of the technology "concrete jet" used in conjunction with metal pieces in wire covered with stitch as a viable way of large-scale production and covering the structures built on the site without the use of molds of casting, other surfaces or lifting. The initial method of construction was to use a concrete circular foot in which the messages of anchoring were fixed. Tubes cut in length and with flattened extremities were screwed then together to form a duodeca-rhombicahedron (22 hemisphere faces) geodesic structure with reaches to 60 feet (18 m). The shape was then covered by layers of wire netting of ¼ with thumb fixed by ties. The concrete was then pulverized on the structure, the constitution of a solid coat which, once dry, was an additional concrete support to conjugate with a variety of traditional ways. Fuller made a reference to these buildings as monolithic concrete armed with geodesic domes. The form of tubular frame turned out the problematic at the level of windows and doors and was abandoned. The second method used bars of iron armature placed vertically in the concrete sole, then folded up inward and welded in position to create a structure of dome. Domes in three floors built with this method have proved outstandingly solids. Other forms, as cones, pyramids and arcs showed themselves so adaptable. The project was realized thanks to a subsidy established by the University of Syracuse and sponsored by US STEEL (bars), Johnson Wire Corps (mesh) and Portland Cement Compagni (concrete). The capacity to build big complexes carrying concrete structures covering in the free space would open numerous possibilities in the architecture, and is considered as one of the biggest contributionsof Fuller.

Fuller was a big traveler, often changing time zone. He had three watches, the one for the zone in which he was, one for the zone which he had left and the last one for the zone where he was going to (his watches became a symbol). In this respect, he follows the drummer of jazz Buddy Rich, who, in the song " The bracelet for a drum " of Pete Atkin / Split James, carries three watches too: one on the right wrist, the other one on the left and the third around the knee. The watch in question is the imagination " Omega Incabloc Oyster Accutron 72 " for who Buckminster Fuller conceived a business. Fuller also noted that a single paper sheet newspaper, inserted on a shirt and a jacket, is completely effective for a heat insulation during long flights.

" There is nothing in a caterpillar that tells you it's going to be a butterfly. "

" I'm not a genius. I'm just a tremendous bundle of experience. "

" Everyone is born a genius, but the process of living de-geniuses them. "

" You never change things by fighting the existing reality. "

" To change something, build a new model that makes the existing model obsolete. "

part from this article