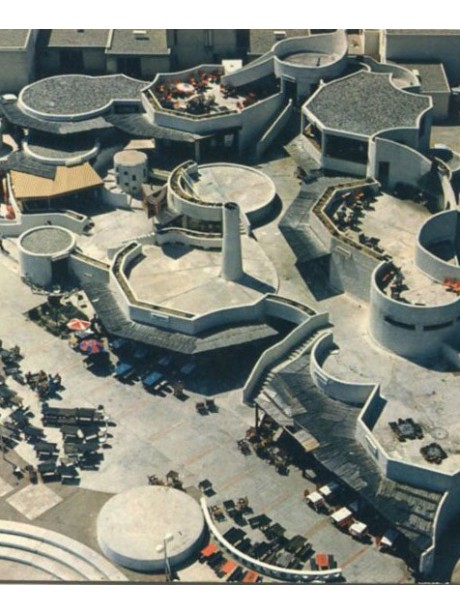 Coming from Greece, born in Baku (1913-1995), the French architect Georges Candilis studied to the national Ecole polytechnique of Athens before working, from 1946, with Le Corbusier, on the project of habitations unit of Marseille, which he managed the with the American architect Shadrach Woods (1923-1973).

In 1951, Candilis and Woods managed the African office of Atbat (builders studios), structure created by Le Corbusier, Vladimir Bodiansky and André Wogensky. In his return in France, Candilis met in Atbat the Yugoslav architect Alexis Josic (1921-2011).

The adventure of the team Candilis-Josic-Woods began in 1954. In a decade of common work (1955-1964), these three architects based in France put the theoretical bases of a criticism of the functionalism and, through uncountable construction works, applied on a large scale the principles of a new architecture called "proliferating".

They tried to produce new housing typologies, adapted to the economic and social conditions of the most deprived inhabitants. The human being is in the center of their concerns. "The respect has no formula, no recipe. It is the feeling that architects have to possess with their customers; if the construction can give material satisfactions, the architecture has to bring something furthermore: the dignity and the freedom" (Candilis, 1977).

Their absolutely new architectural reflection, centered on the housing, postponed from this of Le Corbusier and was closer to searcheson the minimal housing led by the German architects of the twenties.

The progressive abandonment of a rational and normative idea pull the architects' team to take refuge on "proposals for an evolutionary housing", integrating the problem of the growth and changes on the scale of the individual house.

They approached the question of housing by giving the priority to the organization of the plan.

The team conceived according to a subtle rationalism in the style of Louis Kahn ( served/serving spaces), precise functions: access, arrangements, baths etc.

Among others realizations, let us quote the extension of Bagnols-sur-Cèze and the district of Mirail in Toulouse. From 1969, Candilis continued only its activity as architect and town planner. He worked on several projects of housing and schools in the Middle East, as well as on the arrangement of touristic places.

In 1970, surrounded with new collaborators, Candilis conceived the village of Carrats in Port Leucate following the principles finalized before. They resumed the cluster and stem systems, Anglo-Saxon metaphors of a scientific town planning, seduced by a mode of organic organization of the housing, important for Patrick Geddes.

"The most important work which results from this work, from this agreement, from this perseverance, is the creation of favorable conditions to allow people to meet each other, to know each other. And the knowledge leadingto the friendship, strengthens the peace between the peoples"

He took part of operations of construction of the Mission Racine, program for the tourist development of the coast of Languedoc-Roussillon, for which Candilis was named architect in chief in 1964.

For the team of Candilis, the operation of Carrats became a place of architectural experiment with social dimension. Composed of bungalows with cubic forms, their roofs terraces, patios, the collective buildings, the numerous public places (small squares, playgrounds) allowed the creation of an ideal place where everything was made to aim towards an individual and collective happiness.

The architects of the Team 10 (1), which Candilis took part of, insisted on the relation of the architecture with « the fourth dimension". The key concepts of " space / time " and of " movement ", must be associated to those, of " plasticity ", " mobility ", " flexibility " and " Evolution ", in the fight for redefining of the humanist architecture, the architecture of community.

In 1961, Team X with the concepts of Stem and Web reject the dogma of the functional zoning of the charter of Athens, and its measurement tool Zipaton : a mechanical plasticized grid which, once stuck on the paper, stood out a general type of use, rather than a volume or a shape in particular.

Basing on these two concepts, the consideration of the function does not base itself any more only on the space, it integrates the scale of the man into its movements and its time of course inside spaces (2).

The concept of stem (stalk) is used as a way to organize the town planning. More concretely, the stem was a pedestrian continuous zone connecting the main urban equipments. The central stem is considered as fundamental, at the same time social and material structure, the residential sets.

The stem appears for the first time in their project for the competition of Caen-Hérouville, then in Toulouse-Le Mirail. He grows rich afterward with the cluster of " grapps " of constructions of little and tall heights articulate around the public places (stem) which go on in the residential islands.

The concept will continue its evolution with the appearance of Web which " is not essentially a system of traffic, but a system of environment. It is the only way to establish the large-scale hierarchisation, that by its existence makes possible a very small-scale individual expression. Web has to be a highly flexible system in a world of a big mobility. Flexibility is guaranteed by the uniformity of the initial intensity of activities on Web, so that he can be hung on on any point, and so that he can himself hang on to the systems more important to any place. These connections determine points of very big intensity but first flexibility always stays and the points of density which arise as Web by living becomes polycentrique, keep their character of mobility. These systems will show, in their beginning, an intensity of equally distributed activity, not so as to compromise the future ". Woods, Paris, August-December, 1962 (3-4).

The question of the largest number urged Team 10 to innovate not only on the programmatic or urbanistic register, but also in the esthetic domain.

The architects are interested in the rhythmic of the numbers, thanks to the rhythm and thanks to the geometry, large numbers became handy for the composition and visually understandable.

The basic principles were a relation of reciprocity between the part and the whole, as well as the not hierarchical structure and polycentric which connected between them the various scales of the constructed environment.

It is in the continuation of the general current of the modern architecture and this ideological restructuring that will be born the operation of Carrats de Port-Leucate in 1969.

The members of the Team 10, emerged from Ciam in the fifties, by their analyses, drawings, publications, teachings, aroused a profound renewal of the modern thought on the architecture and the city, because for them: " the structure of a city does not hold its geometry but the human activities which it receives." Candilis-Josic-Woods, 1964 (5).

(1)  The name of Team 10 makes reference to the Xe CIAM congress (international modern architecture congress) during which an architects group coming from modern movement asked the principles of the Athens charter.